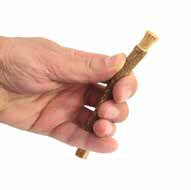 It should be done before starting ablution or before rinsing the mouth. This is the second situation where Siwāk is recommended.

Abu Hurayrah (ABPWH) narrated that Allāh’s Messenger (PBUH) said, “If it was not for the fact that I may be overburdening my nation, I would have ordered them to use the Siwāk before every prayer.” (Ahmad no. 9928, Ibn Khuzaymah no. 1/73/140, Al-Hākim no. 1/245, and it was also reported by Al-Bukhāriy)

In a narration of ‘Ā’ishah, she said, “We used to prepare his Siwāk and his purification water for him, and Allāh would cause him to wake whenever He, the Almighty, willed during the night, at which time he would use the Siwāk, perform Wudū’, and pray.” (Muslim no. 746)

Saying “Bismillāh” (In the name of Allāh). 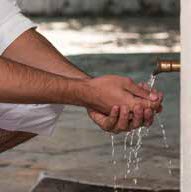 ‘Uthmān (ABPWH) described the Prophet’s way of performing his ablution. He said, “The Prophet (PBUH) asked for water, then washed his hands three times ...”

‘Uthmān (ABPWH) said, “I saw the Prophet performing his ablution in the same manner as the ablution I am performing right now.” (Al-Bukhāriy no. 164, Muslim no. 226) 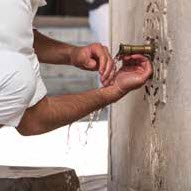 Starting with the right hand side when washing the hands and feet.

‘Ā’ishah, may Allāh be pleased with her, narrated, “The Prophet (PBUH) used to like starting with his right hand side first when putting on his shoes, combing his hair, purifying himself, and in all of his affairs.” (Al-Bukhāriy no. 168, Muslim no. 268)

Beginning by rinsing the mouth and sniffing water into the nostrils, before washing the face.

‘Uthmān (ABPWH) said in his description of the Wudū’ of the Prophet (PBUH), “... and he rinsed his mouth and sniffed water into his nostrils and blew it out, then washed his face three times ...” (Al-Bukhāriy no. 199, Muslim no. 226)

If, however, one washed his face first and delayed rinsing his mouth and sniffing water into his nose until he completed washing his face, there would be no problem.

Exaggeration in sniffing water into the nose, unless one is fasting.

It was reported by Luqayt Ibn Saburah (ABPWH) that the Prophet (PBUH) said, “Make Wudū’ thoroughly, wash in between your fingers, and exaggerate in sniffing water into your nose, unless you are fasting.” (Ahmad no. 17846, Abū Dāwood no. 142) 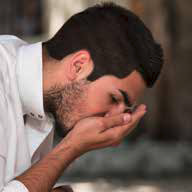 Using a single handful of water to rinse the mouth and sniff water into the nostrils, performing this three times.

‘Abdullāh Ibn Zayd (ABPWH) described the Prophet’s ablution saying, “He put his hand into the vessel, rinsed his mouth, washed his nose with water and blew it out three times, with only one handful of water.” (Al-Bukhāriy no. 192, Muslim no. 235) 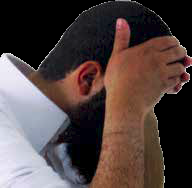 Wiping the head in accordance with the Sunnah.

‘Abdullāh Ibn Zayd (ABPWH) described the Prophet’s ablution saying, “He wiped his entire head with his hands. He started at the front of his head, moved to the back, then returned to the front again.” (Al-Bukhāriy no. 185, Muslim no. 235)

Washing once is obligatory, whereas washing three times is Sunnah, and one should not wash an organ of Wudū’ more than three times.

Ibn ‘Abbāss, may Allāh be pleased with them, narrated that the Prophet (PBUH) washed every organ of Wudū’ only once. (Al-Bukhāriy no. 157)

Accordingly, it is preferred to follow these different forms of Wudū’ in different occasions. It is also allowed to wash the face three times, the hands two times, and the feet one time, as proven in the Hadeeth of ‘Abdillāh Ibn Zayd in another narration.

However, the practice of the Prophet (PBUH) most of the time tended to perfection, washing every organ three times.

Uttering the narrated supplication of Sunnah after Wudū’.

‘Umar (ABPWH) narrated that the Prophet (PBUH) said, “None of you makes ablution and completes it without uttering, ‘I bear witness that none has the right to be worshiped except Allāh alone, and He has no partners, and I bear witness that Muhammad is His slave and Messenger,’ except that all eight gates of Paradise will be opened for him, so he may enter from whichever gate he pleases.” (Muslim no. 234)

Furthermore, it was mentioned in the Hadeeth narrated by Abi Sa‘eed (ABPWH) that the Prophet (PBUH) said, “Whoever makes ablution and says, ‘Glory be to You, O Allāh, and all praise is due to You. I bear witness that there is no God except You. I seek Your forgiveness and I repent unto you,’ Allah will seal it with a stamp, then it will be raised under the Throne and it will not be broken until the day of resurrection.” (An-Nasā’iy, Book of the Day and Night p. 173-174, An-Nasā’iy in As-Sunan Al-Kubra 6/25)

Ibn Hajar, may Allāh have mercy upon him, authenticated the Isnād (Chain of narration) of this Hadeeth and he said it is not classified as Marfoo‘, but it is rather Mawqoof (Mawqoof refers to a narration attributed to a companion, whether a statement of that companion, an action, or otherwise). Ibn Hajar continues that, however, this does not harm the grade of the Hadeeth, which is considered to have an equivalent authenticity of a Marfoo‘ Hadeeth, because its content is not prone to accommodate the opinion of the narrator.