The Prophet (PBUH) would brush his teeth with a tooth-stick/brush.

The Prophet (PBUH) would recite certain Adthkār upon waking up.

It is reported in Saheeh Al-Bukhāriy that Hudthayfah h said, “When the Prophet (PBUH) used to go to sleep at night he would say,

‘In the name of You, O Allāh, I die and I live,’ and when the Prophet used to wake up he would say,

The Prophet (PBUH) would wipe his face after waking up.

The Prophet (PBUH) would look at the sky.

The Prophet (PBUH) would recite the last ten verses of Soorat Āl-‘Imrān (Chapter no. 3 of the Holy Qur’ān)

The above three Sunan are mentioned in an agreed upon Hadeeth narrated by Ibn ‘Abbāss who said, “I spent a night with my aunt Maymoonah the wife of the Prophet (PBUH) , may Allāh be pleased with her. I lay down across the cushion and the Messenger of Allāh (PBUH) and his wife were laying along it. The Prophet (PBUH) slept until midnight, or a little before, or a little after, then woke up, and began to rub the sleep from his face with his hand. He then recited the last ten verses of Soorat Āl-‘Imrān, then got up and went to a water skin that was hanging up and performed ablution from it, performing it well, and then he stood up and prayed ...” (Al-Bukhāriy no.183, Muslim no. 763)

In another narration reported by Imām Muslim it said, “The Prophet (PBUH) woke up near the end of the night, went out and looked at the sky, and then recited,

‘Verily, in the creation of the heavens and the earth, and in the alternation of night and day, there are indeed signs for men of intellect.’ (Soorat Āl-‘Imrān, Verse 190)” (Muslim no. 256)

In Muslim’s narration, it is illustrated that in order to practice this Sunnah one should recite the last ten verses of Soorat Āl-‘Imrān, beginning at

The Prophet (PBUH) would wash his hands three times.

Abu Hurayrah (ABPWH) narrated that the Prophet (PBUH) said, “When any one of you wakes from sleep, he should wash his hands three times before placing them in a basin of water, because he does not know where his hands had spent the night.” (Al-Bukhāriy no. 162, Muslim no. 278)

The Prophet (PBUH) ordered that one who wakes up should sniff water up the nostrils and blow it out three times.

Abu Hurayrah (ABPWH) narrated that Allāh’s Messenger (PBUH) said “When any one of you wakes up from sleep, he should sniff water into his nose and blow it out three times, for Satan spends the night in his nostrils.” (Muslim no. 238)

In the narration of Al-Bukhāriy it reads, “When any one of you wakes up from sleep and performs ablution, he should sniff water into his nose and blow it out three times, for Satan spends the night in his nose.” (Al-Bukhāriy no. 3295) 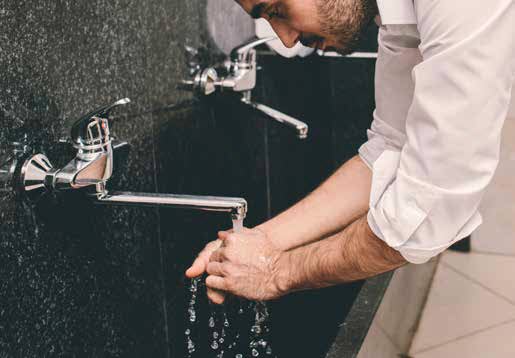 This is mentioned in the previous Hadeeth of Ibn ‘Abbāss, may Allāh be pleased with them, which says that he (PBUH) brought a water skin and made ablution out of it.